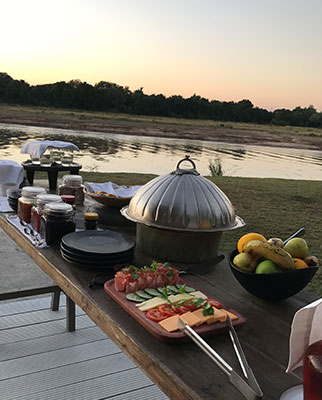 I met Brian, my new guide on the other side of the river, bumping into Klaus from Puku Ridge en route. Brian was brilliant and even that is an understatement. Totally fascinating about the history of Norman Carr safaris, as well as any animal, plant or bird in the bush as well. Such a vivacious and fun guy to be around, his passion for life was totally infectious.

Just before we got to the river crossing to Chinzombo, we found a leopard cub lying in the shade of the trees. I say leopard cub, she was about 6 months old, so beyond the cute and cuddly stage, but it was still fantastic to see. They’re so beautiful and the pattern of her coat hid her so within the trees I was amazed Brian had spotted her!

We crossed the river to Chinzombo and what a place. Very chic and modern in design, but incorporating safari traditions of sumptuous sofas, leathers trunks and dark wooded furniture – tables and chairs, with a white company-esque hint. Really lovely. There was a small flight of stairs up to the main bar and dining area with pools of water either side, a very modern and chique brae area overlooking the river, with the most enormous fire pit.

The rooms were out of this world. All lining the river bank, four on one side and two larger family sized rooms on the other. Huge old fashioned wooden doors set in a modern off white wall opened up into a beautiful room. A huge king sized bed adorned with a dark mosquito net, and trunk styled bedside tables either side. The second half of the room was made up of an old school traditional canvas and leather open wardrobe, with a bath set in the middle of the room and a his and hers sink. Looking out onto the veranda was a huge curved sofa, leading down to a second sitting area, again with lots of pastel nude colours. To the right was a small swimming pool, all set beneath morpani trees looking out onto the river. Seriously stunning.

The food overall all was very good at Chinzombo, a huge array of choices for brunch, which I had with Vanessa, one of the girls from the main office. I then had a few hours to settle into my room and relax a bit. I watched a family of vervet monkeys playing on the ground and in the trees around my deck area. So entertaining.

I then met Brian back on the main deck for afternoon tea, featuring chocolate chilli cake, a selection of teas and cold drinks, I opted for the iced tea.

Across the river we went and back into our Land Rover. Walking up the steps, Brian was chatting away in the local dialect to the spotter, and pointing to the ground. He explained to me that a leopard had made a kill sometime this morning and a crocodile had then snatched it away from the leopard and dragged it for some distance back to the water. This was one big croc, the track marks showed how huge its belly was, about 2ft wide, followed by the heavy tail being dragged behind, which was equally as large. Love how every track tells a story.

Wild dog were in the area, so we headed to where they had been seen. Along with the whole world and his wife. I’ve been seriously spoilt with having most game drives to myself and never seeming to bump into anyone, so this was a really eye opener to have about 8 other vehicles, plus, in the same vicinity. Just a way from the wild dog were two lions resting on the side of the river. Along with herds of Impala and Puku on the open land between the two predators, there was a lot going on. 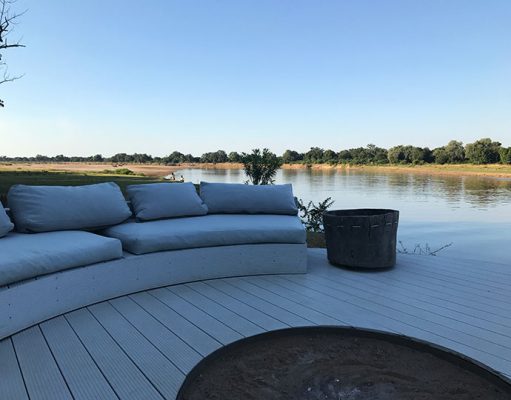 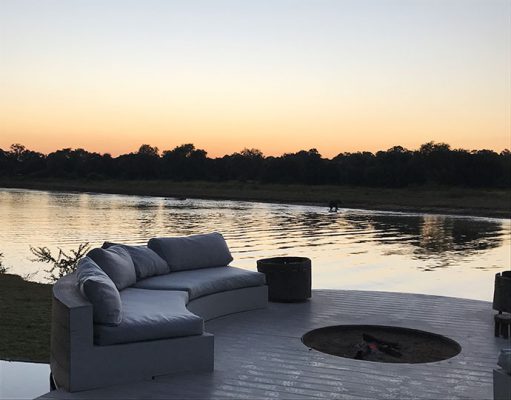 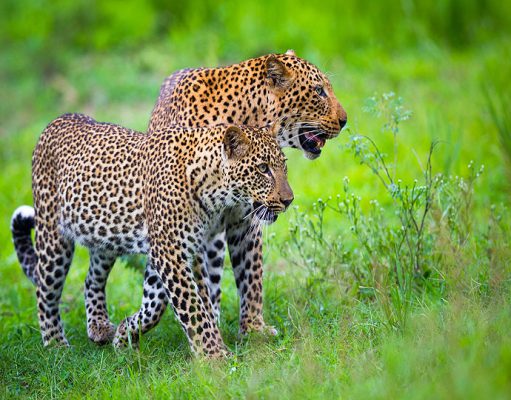 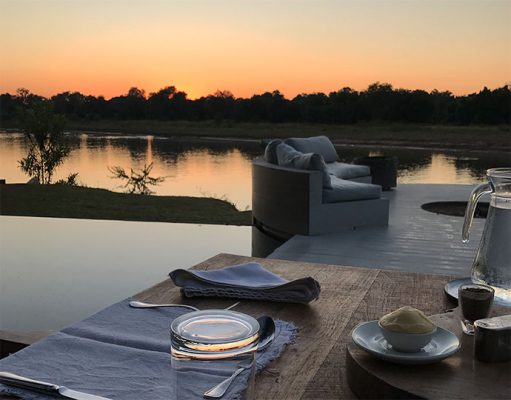 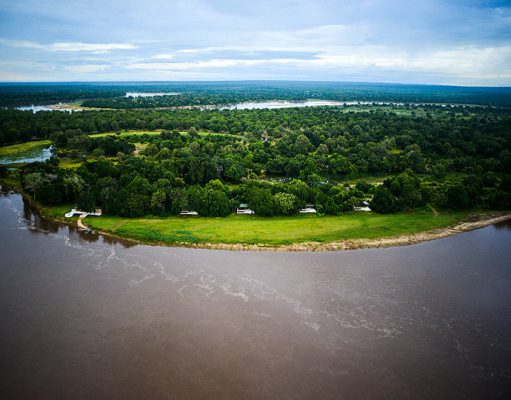 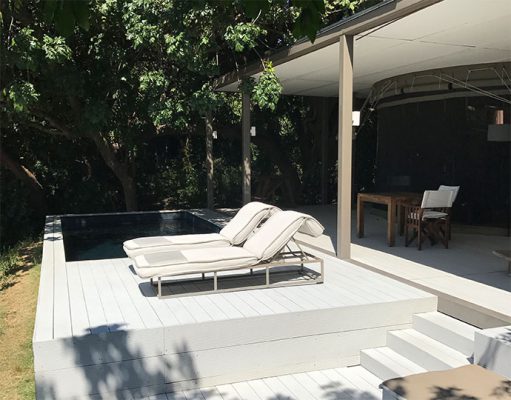 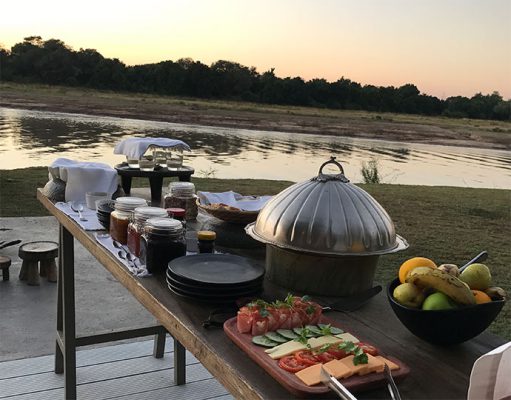 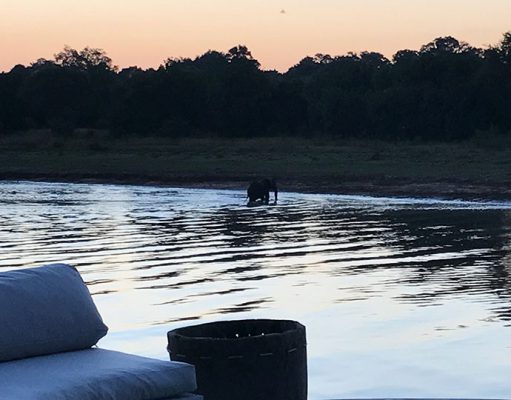 We had some sundowners and decided to leave the wild dog until six, in case something was about to kick off. Nothing did, so we had a small night drive.

Returning to camp, I met Gayle, another one of the Time and Tide team. We had a lovely supper together, starters were pear and beetroot, followed by beef and red peppers. Finished off with plate of cheese.

I slept like a log that night, having had the most dreamy bath. If requested, they run a ‘special Chinzombo‘ bath for you including bath salts and bubble bath. Just bliss. Oh yes, following on from my complimentary foot massage earlier on in the day, I was feeling very relaxed…!

Morning wake up call came with the news there was an elephant behind my tent and not to come out too quickly… Of course this news woke me up straight away as I wanted to see the Ellie! I tentatively ventured down to breakfast on the main deck, waiting to bump into him.

En route to the main deck I didn’t bump into the elephant, he was in fact waiting for me at breakfast. I saw him emerge from the side of my room and gently made his way down the bank to cross the river. Cup of tea in hand, Brian came to join me for breakfast. We watched as this young bull elephant slipped into the water, sink below the surface with only a small part of his back, head and trunk acting as a periscope above the water. Danger averted, the elephant started to play in the water, shaking his head, bobbing up and down, rolling around etc. The guys who do maintenance on the boat hadn’t noticed there was an elephant in the water and seemed to be heading straight towards him. Last minute, both boat and elephant noticed. The poor ellie getting a helluva fright and trying to dash as quickly as he could out of the water. Think the boat guys felt the same!

Today we were going to check out some of the other Norman Carr camps : Luwi, Machenja, Kukuli and Nsolo. All offering the same thing, but all ever so slightly different. Norman Carr is mainly walking safaris, so these camps are placed so they are easy to walk to. They will transport your bags ahead of your walk, so they are waiting for you in your room when you get to the different camps after your walk. They also offer fly camping on the river bed, where you walk a bit and then meet for a sundowner followed by bush dinner then camp under a mosquito net under the stars.

Between these camps, I was lucky to bump into a pride of lion. Two males called Ginger and Garlic with lovely ginger mains. They had obviously eaten well, their tummys were huge! On approaching Luwi, we then came across another pack of wild dog too. Very lucky.

On return to camp, I met Mindy, another representative for Time and Tide, who was great. She said I needed to go and check out Mulberry Mongoose, jewellery designed by Kate Wilson, the wife of the MD for Norman Carr safaris. She uses snare wire to make jewellery therefore highlighting the plight of animals getting trapped in this hugely tough wire. Ruthless stuff.

Saying my goodbyes, to staff and to Zambia, I reluctantly climbed into the Land Rover and we headed towards Mfuwe airport. I asked Charles, my driver and guide, if he could stop off at Mulberry Mongoose on the way, which we did. What a shop, plus Kate was so wonderful! Huge passion into all of her work was infectious. Obviously I bought a few things!

We passed through all the local villages on the way to the airport. Loved seeing the hubbub of Zambian life ticking on by. Chinzombo was beautiful and such a great place to end anyone’s safari on, pure relaxation.