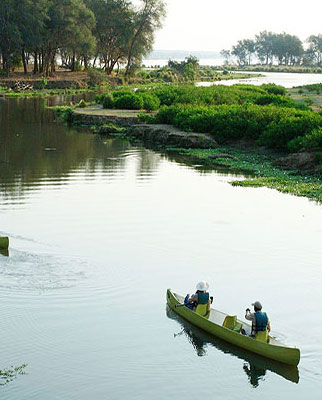 An hours boat drive down river we pulled up to a spot on the shore to be greeted by Marshall, one of the guides from Old Mondoro. We had to swing by Jeki ‘international bush airport’ to pick up some other guests who would also be staying. We passed elephant after elephant, waterbuck, tons of Impala and pulled up to a dirt track airstrip with ‘duty free/check in/security’ being a small shed on the side. Seeing the small prop plane come into land was very cool. Then it was like a Mary Poppins bag, endless people then merged out this tiny plane! Well, four altogether, not that many to be honest. One of which the guests was the legend that is Lloyd – 83 years of age and travelling with his son, David, on a once in a lifetime boys trip to Africa. Mosi in hand, these Aussies were in they’re element.

The drive to Old Mondoro was like a scene from the BBC’s series ‘Africa’, there was wildlife everywhere. Guests are usually blown away by going straight into a game drive as soon as you leave the airport. We first came across Vulture feasting on a dead Impala (defeated by a stronger opponent) waterbuck herd everywhere you turned, same with Impala and Elephant grazing peacefully below winter thorn trees.

The landscape over here totally different to that of Chiawa and Sausage Tree. Hundreds upon hundreds of winter thorn stretched for miles upon what once was a flood plane for the lower Zambezi. With the introduction of the Kareba dam about 60 odd years ago, what once would have been vast water plains, have now been taken over by the wilderness. Winter thorn trees are the first to germinate in soil high in potassium, they cleanse the damaged ground to make it more fertile enabling other species of plant to eventually lay claim to the now nutritious ground. The winter thorn then die back themselves, they’re job done. This time of year, the bush is still lush from the rains, but give it another months time and all of the ground bush die back, revealing the dusty earth. The winter thorn pods drop to the ground becoming effectively biscuits for the elephant. Soon the maze of winter thorn trunks will be inundated with thousands of wildlife.

Old Mondoro is beautiful, four small ‘match stick’ type bush camps line the rivers edge in amongst the tree trunks. This is bliss. Effectively its old school safari style; small rooms with all the necessities from outdoor bath and shower to comfy day beds on a small private deck with a view of the river and bush surrounding you. You really are just a thin mosquito net away from the elements. There have even been instances where a meandering elephant casually dips its trunk into your morning bath, wandering onwards when the soap taste gets too much. Here you are really in the wild.

Old Mondoro is named after a rare white lion years and years ago that used to inhabit this part of the Lower Zambezi. Talking to Rhian and Michelle, the two camp managers, there apparently used to be a pride of 47 lion around thirty or forty years back. I was sure they were winding me up, but no, there really was a pride that’s big. 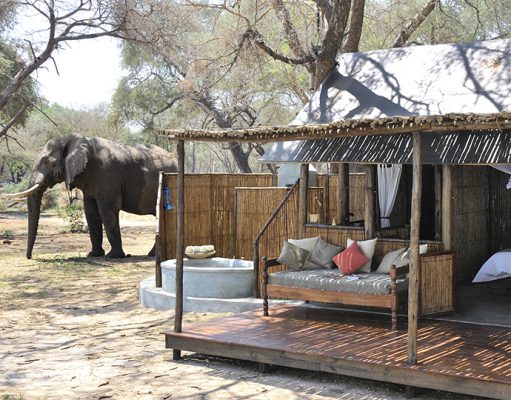 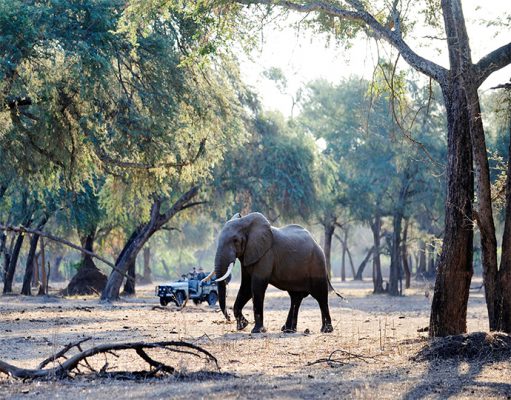 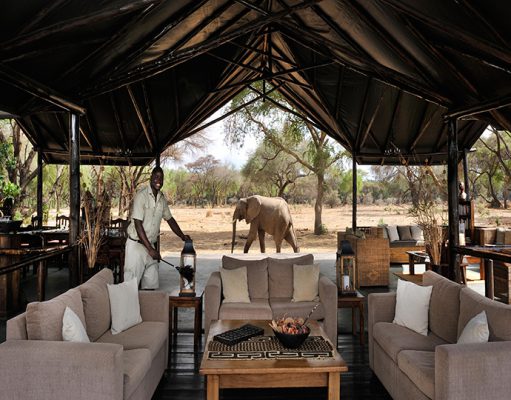 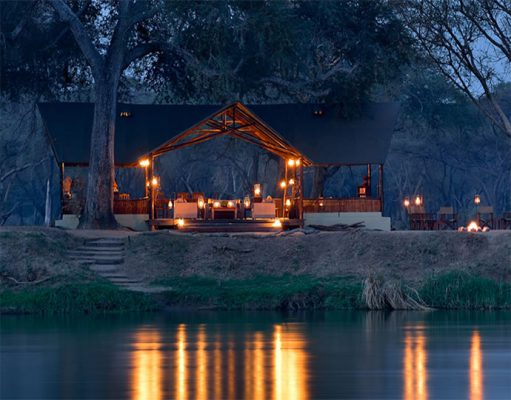 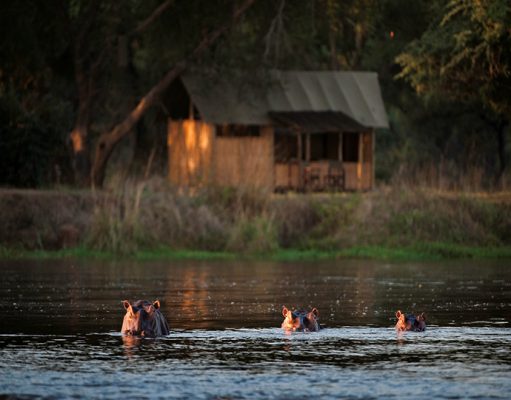 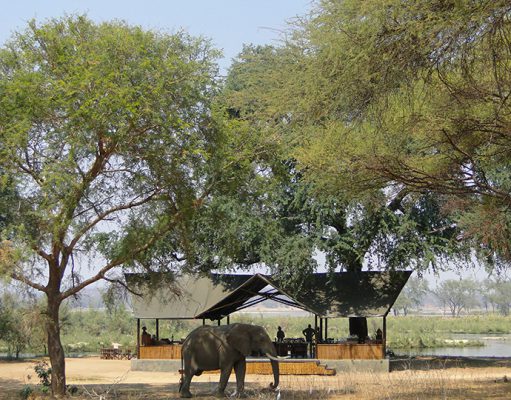 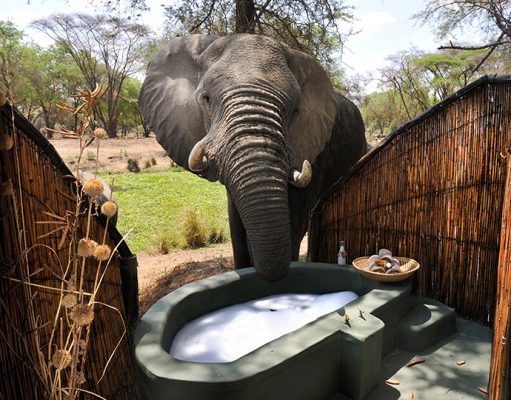 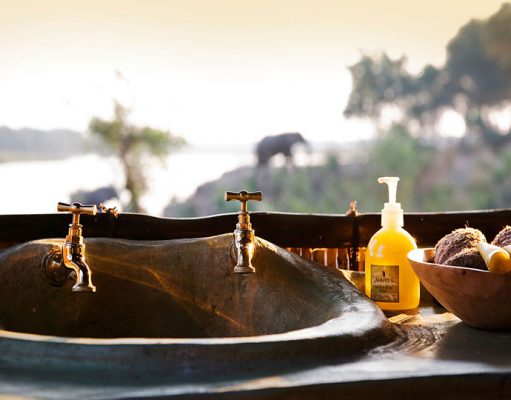 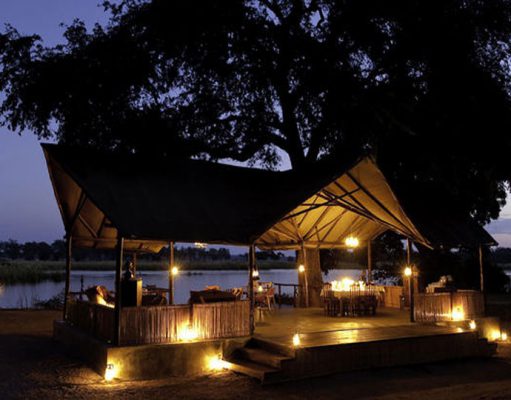 Having settled into our rooms we returned to base camp to begin the evening and night drive. We stumbled across two bull elephant five minutes outside camp, the older bull having only a single trunk loosing the other to infection or the likes of. Impala after Impala, waterbuck and then a face off with a couple of warthog followed. Warthog are brilliant, the unlikely comedians of the bush, with their antennae like tails, trotting along on what clearly is a very important mission.

We settled on an open plain below a baobab tree for sundowners. An elephant making himself scarce rushing back into the bush in the distance. Lloyd and his son David were in their element, especially Lloyd. Rosheen and her husband Ian were lovely also, true die hard experienced safari goers, it was interesting to see how they rated the different places and areas they have previously been to, being fans of the ‘back to the bush’ experience of Old Mondoro.

As day turned to night, with the flick of the switch the bush came alive. The noises began to grow and was soon over taken by a bark from a baboon in the distance. This must mean one thing, they’d been spooked by something … Hopefully a leopard!

We followed the direction of baboon calls until we saw flash lights through the bush. Leopards are known as the ‘ghost cat’ as they disappear and reappear without anyone knowing where they’ve gone or are going to. Normally very quiet cats, we could definitely hear a ‘yahowl’ from within the bush. One side of the bush, nothing, other side… Nothing still. We manoeuvred the truck into a bumpy spot and saw her. Lying below a mound of earth directly in front of us. A young female leopard. She couldn’t have cared less if we were there or not. We were with her for about 15 minutes or so then let her be so she could hunt for Impala – there are plenty about!

We then continued on the night drive and came across a wild cat, literally exactly that, a small feline searching for mice in the bushes. We then spied a civet, a type of mongoose cross raccoon. She was hunting around for Beatles. These animals genuinely look like they’ve been stuck together: the front half of they’re body is like a raccoon, with the black bandana markings over the eyes, halfway down their body the markings change and form into that of a cat. Very bizarre mix match of species pieced together. We then came across a Genet, another small feline species, with the most beautifully long elegant tail.

In the morning, I decided upon a more leisurely approach than at Old Mondoro and decided against going on a game drive in the early hours. It did mean missing the classic comments from Lloyd being in his 83 year old element. I woke at 6am to the sound of lion roaring somewhere off in the distance. I’m becoming more accustomed to the sound of the bush, it’s amazing. I now hear hippo and am like, ah hippos almost as though it were a dove cooing outside my room. They say that for every 1km on the Zambezi, there are probably about 50 hippo… So there are a fair few about.

Having a leisurely morning, wallowing like a hippo myself in the open air bath, I pottered up to the main area and had a cup of coffee. It was quite nice to have the camp to myself, really appreciating the layout and the stunning river view. It was also prime opportunity to have a real nose around and get a feel for the place. Michelle and Rhian joined me for a coffee eventually and we had a chat about the camp, where they were before, what guests have been like, a bit of gossip here and there etc etc. It was nice, like sitting down with friends and having a good old chin wag! I then exchanged cards and jumped into a boat taking me for a short river cruise before ending up at my next and final stop on the lower Zambezi, Anabezi.