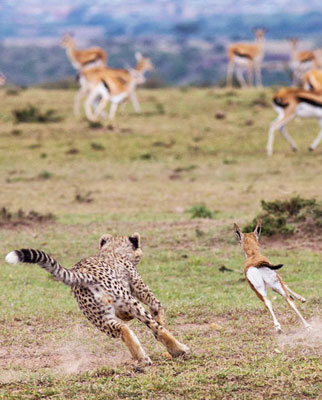 Luxury photographic safaris took off in the sixties when it became widely accepted that hunting was not sustainable, and people preferred to take pictures of the wildlife. Now photographic safaris produce some of the most amazing pictures one sees of any continent – the light in Africa is so beautiful and when you pair this with the wildlife and stunning game viewing you end up with some of the most incredible footage possible. Now a new phenomena is taking the luxury safari industry by storm and this is what we’d like to share with you – videos. Some of the videos we mention below are shot by amateurs on game drives, it could happen to any of us and we hope it does – these sightings are extraordinary and will make your whole safari. That is the beauty of a luxury safari where you are lucky enough to be guided by some of the most experienced guides in all of Africa, they will put you in the right position to see amazing things.

Sausage Tree Camp in the Lower Zambezi is a magical camp with some of the best guides in Zambia – best of all everyone gets their own private guide for free (other luxury safari camps charge), which means you can do what you like when you like and can sit and wait for the action if the guide feels something might happen. On a hot evening in October our MD was on a game drive with guide Kyle Branch sitting peacefully with a pride of twelve lions – suddenly out of no where a small herd of elephants with a tiny baby started to charge – they had caught wind of the lions and charged straight towards the pride and the vehicles – Kyle’s quick thinking meant they were safely out of the way to watch the action unfold, the dust and loud trumpeting made it one of the most exciting game drives of Rose’s career.

To see lions or any big cat hunt whilst on safari is the dream, it’s what we all want and what we wait endlessly to see. On a game drive from Lewa Wilderness (located on the beautiful Lewa Wildlife Conservancy) it started to rain, another vehicle from the lodge, who had also been watching two lionesses relax under a tree left to go back for lunch but our guests stayed at the scene, the guide knew they would hunt and take advantage of the rain (the plains game such as zebras and eland turn their backs to the rain, so open themselves up for predators) – sure enough the lionesses began to stalk through the grass. Slowly they crept closer and closer to a herd of Grevy zebra – before one lioness took the plunge and charged, missing the zebra by an inch – shortly after the guests found them again, this time stalking a lone eland. The lioness got so close to the eland in the long grass. The eland had no idea it was being watched and eventually when the lioness jumped out of the grass she was able to easily jump on the back of the eland – sadly the eland was able to buck the lion off her back and gallop away to safety – a shame as the lionesses had 7 sub adult cubs who were all very hungry.

This footage of a pride of lions attacking a young elephant is brutal, and hard to watch but perfectly demonstrates the cruelty of Africa – there are certain parts of Zambia and Botswana where lions are known to attack young elephants when the going gets tough. Nature is very cruel, but in this instance the young elephant makes an inspirational escape.

This footage shot by the BBC is so mesmerising you won’t want it to end – it took them many months and lots of money to gather this footage as it was shot from a helicopter but is without doubt the best footage of any wild dog hunt. It is amazing to see how these animals work together, as the front runners tire they drop back allowing other members of the pack to run forward – wild dog exhaust their prey by chasing them for long distances. Liuwa Plains is well known for being one of the best places to see wild dog, cheetah and hyena hunt.

This is one of the most famous videos in all of Africa, shot by guests on a luxury safari in the Sabi Sands area of the Kruger it perfectly demonstrates the fight for survival that all the wildlife in Africa has to deal with on a daily basis. Nothing can compare to the power of a herd of buffalo, but fascinating to see how crocodiles come off when faced with lions.