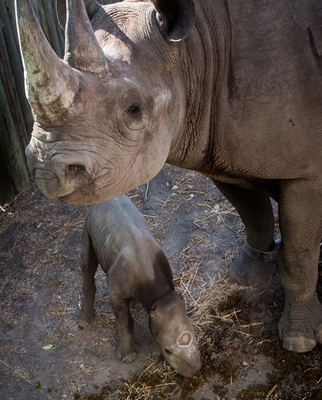 When you go through all the effort of relocating a breeding nucleus of a critically endangered species, it follows that you would pull out all the stops to try and protect them. Especially when it comes to Botswana’s only wild breeding population. Which is why, one Wednesday in November, Wilderness Safaris and Rhino Conservation Botswana were scrambling to organise a veterinarian, helicopter, truck and a team of people to rescue a tiny black rhino calf.

The calf had been found a few days earlier by Pitso Modimbura, one of our dedicated Botswana Rhino Monitors. The minute calf, roughly one to two weeks old, was found in terrible condition, near exhaustion and severely dehydrated. His ears had been torn off (most likely by a spotted hyaena clan) and he had a severe wound in his front right leg but his mother had clearly intervened to save it from the attack.

The calf’s mother had been relocated to the Okavango Delta last year as part of the largest transborder black rhino relocation in history. And after doing a bit of math, it was obvious that she had conceived this calf within two months of settling into the Okavango Delta.

She was still in the area, and would be very protective over her small offspring, so the team had to be extremely cautious. It was decided to try and keep the two together as much as possible in order to encourage a continuation of their natural existence should we be able to save the calf.

The mother was darted from a helicopter; while one ground team followed the mother and helicopter, a second ground team kept eyes on the calf at all times. Once the mother was down, Wilderness Safaris’ Sustainability Coordinator Michael Fitt and Researcher Robynne Kotze were left with her to monitor and take care of her. The helicopter with veterinarian Dr Caron Botes returned to the calf.

The calf was in such poor condition that Rhino Conservation Botswana’s Kyle Burger was able to simply pick it up and put it into the back of a Land Cruiser. The ground team was then under pressure to return to the mother with the calf in tow. Unfortunately by this time the sun had set and the helicopter was forced to return to the airstrip.

With the night sounds of hyaenas and lions in the distance the ground team were able to link up with the mother and the two observers. By this time the mother rhino had been sedated for some time and it was crucial for us to load her into a crate immediately. Luckily everyone understood the importance of the situation and paid close attention to Caron, Mike and Kyle who directed the operation. 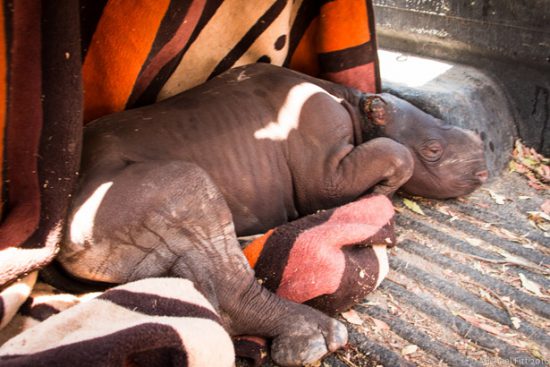 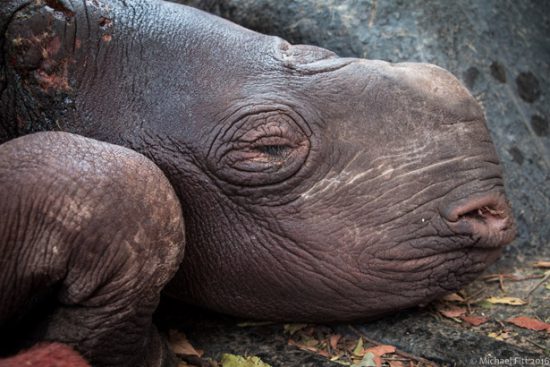 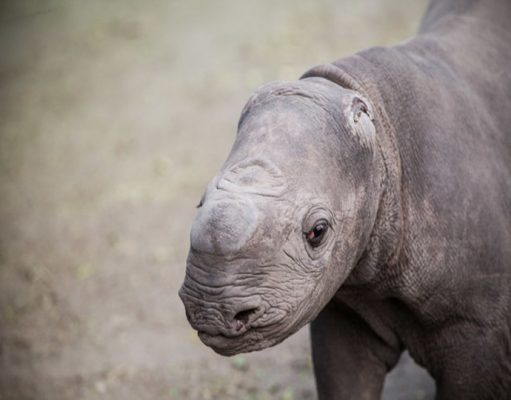 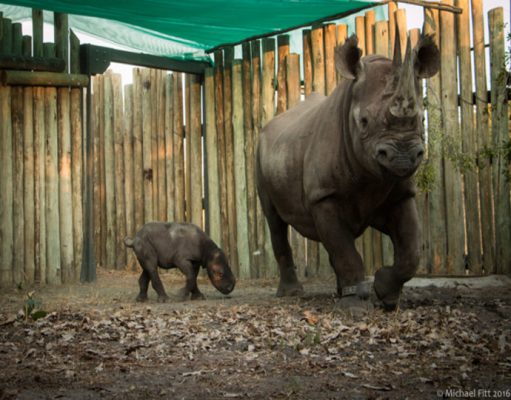 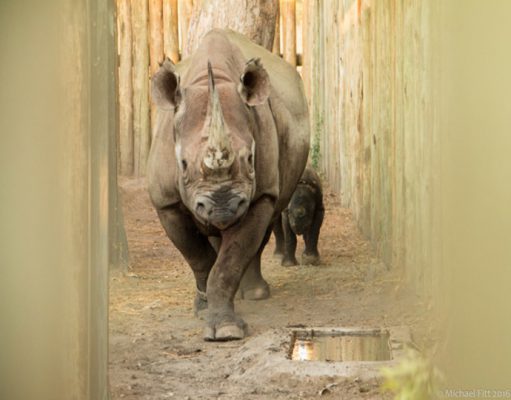 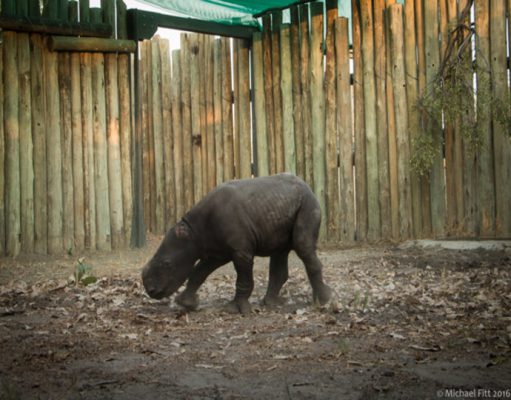 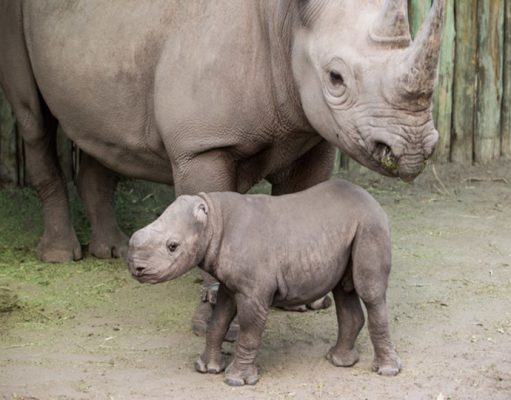 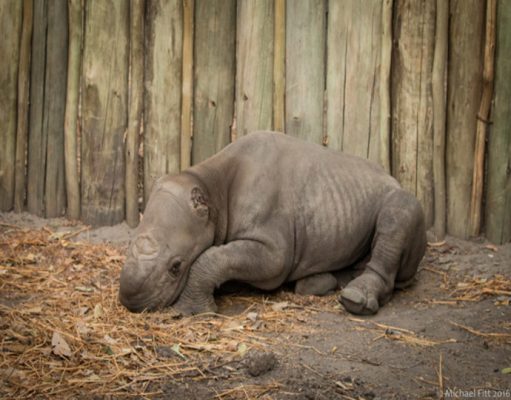 With the strength and endurance that only a black rhino could have after being sedated for such a long time, she stood up and walked into the crate with ease. Then began the long trip to the secure bomas. She was finally unloaded into the boma at 22.30, after being initially darted five hours earlier. Special mention here must go to Boiteko Kgositsile, a Wilderness Safaris mechanic who operated the truck and crane brilliantly.

The remainder of the night was spent in revolving shifts with Caron, Robynne, Kyle and Mike each spending time with the calf in the back of the Land Cruiser, ensuring it remained resting and breathing easily.

With the morning light it was finally possible to conduct a proper examination of the calf. It seems that his ears had been torn off by a predator, but there were no other clear external injuries. His injured front leg was attributed to a shoulder injury, which may be cartilage or ligament damage, or simply bad bruising. Without a scanner or X-ray machine it was impossible to determine the exact cause.

By this time we were desperate to reunite the calf and mother in the boma. His external injuries had been treated, he had been rehydrated and he was dosed with painkillers and antibiotics. It was important to not keep him separated from his mother for too long in case she rejected him.

We isolated the mother in one boma pen and quietly moved the calf into an adjoining one. We covered him in his mother’s dung to mask our own scents and tried to leave quietly. There was a heart-warming moment when the calf tried to follow us out of the boma, sticking close to Kyle’s legs. However he was encouraged back and we closed the doors before he could follow us.

Then, all our hearts skipped a beat when we opened the separation door and his mother came tearing through in real black rhino fashion, snorting all the way. She lifted the calf between her horns, and we prepared for the worst. But she appeared, at the last moment, to recognise her calf and let him down gently to the ground.

Since then, they have been happily sharing the boma and are under our full-time care. We now had to await improvement on the calf’s condition before hopefully being able to release them back into the wild.

Stay tuned for the next thrilling instalment – coming soon!