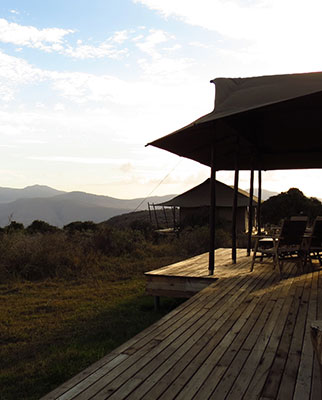 Leaving Kuro Tarangire behind us, we set off on our way to the Ngorongoro Crater. Not before we had stopped off to have lunch at Gibbs Farm near Manyara. What a special place Gibbs Farm is. Hidden amongst a natural coffee plantation, is Gibbs Farm. Steeped in tradition and farming this place still continues this to this very day. Everything is grown on site and served daily at breakfast, lunch and supper. The accommodation is simple yet very comfortable and each room is equipped with a fire that links between the bathroom and bedroom kicking out lots of heat when it gets a bit chilly at night.

Leaving this wonderful place behind, we ventured upwards towards the summit of the Ngorongoro Crater. We stopped briefly at the main gates – something I can only describe as looking like the entrance to Jurassic Park – very exciting! – we then paid our conservation fees and set off on the winding road rising up to the rim of the Ngorongoro crater. We passed buffalo climbing their way through the jungle like surroundings, which was very surreal, they should be on the open plains surely! Troops of intimidating baboons – a warning from Ian saying to shut our windows as they can be quite naughty!

We then stopped briefly at a view point looking into the crater itself – what a sensational view! It truly was breath-taking, I felt like I was on google maps having selected the satellite option for viewing! Just sensational viewing. Continuing on our journey towards Entamanu, we came to the very top of the crater and this was an unbelievable view – to the right of us was the crater and to the left we were looking out over the Serengeti plains – truly unbelievable.

We arrived at Entamanu where the weather had taken a slight turn for the worst. Being used to the heat, this was quite a shock to the system, but this is not unusual for the crater. Many people believe, once you go to Africa, the weather will be warm and sunny all the time. Here you need to make sure you have packed a few jumpers and long trousers. The lodge has three huge fireplaces within the main mess tent, so will not be cold. We all settled in with our hot chocolate and amarula warming us up whilst we listened to Lawrence letting us know the general rules and regulations of the camp.

After warming up from our chilly experience in our lovely tented rooms with heaters, we all met back in the mess area and sat down for supper on a long table in the dining area, with all the other guests. With the wind whipping the outside of the tent, we all felt very smug being cosy and warm inside.

After supper we all ventured back to our tents where our beds had been turned down and hot water bottles popped within the sheets. It was like lying in a cloud – seriously comfy beds. 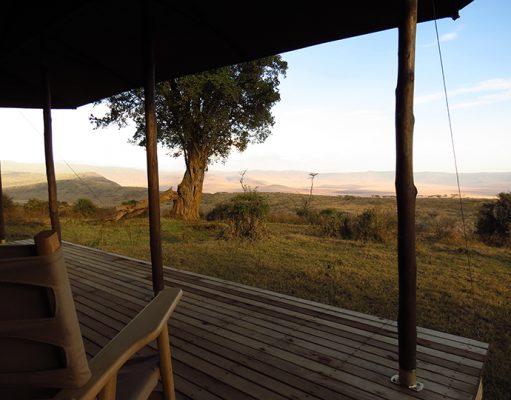 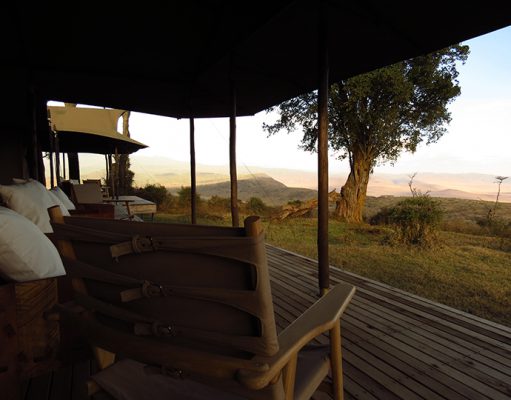 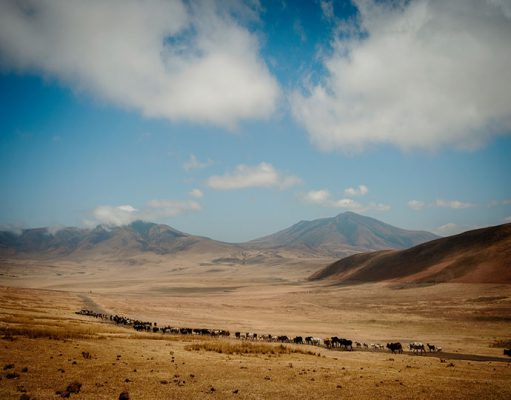 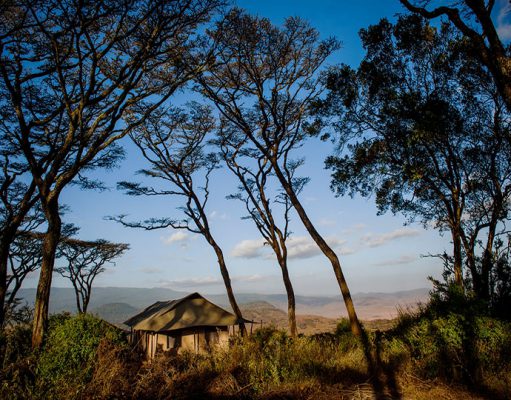 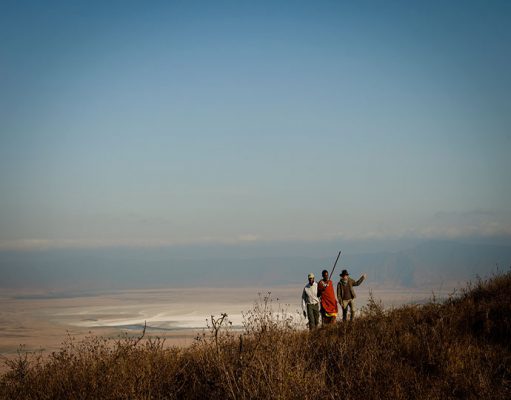 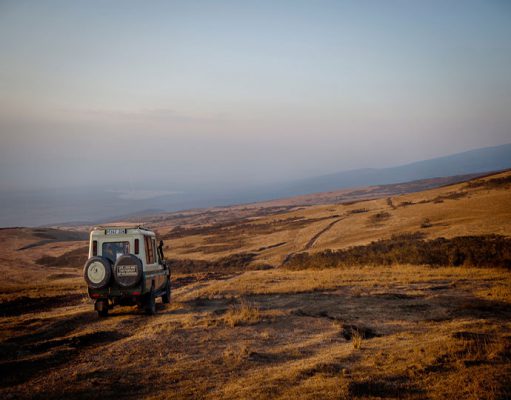 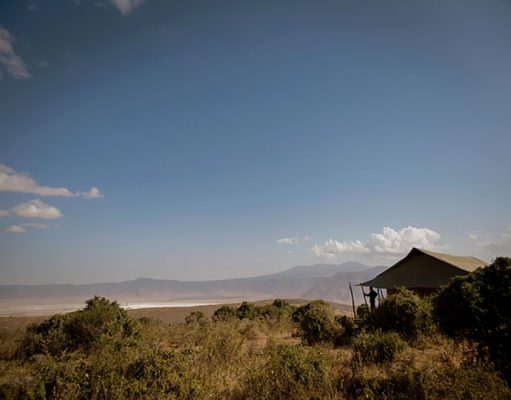 5.30am came too quickly. Cup of coffee in hand, we met everyone by the car and journeyed on down into the crater. As the sun peeped over the rim of the crater, it was a pure Lion King moment as the light began to swallow everything very gradually in its path as it creeped along the crater floor. First into the crater was truly spectacular, we followed 2 black backed jackel making their way down the track and up to our right was huge bull elephant grazing on the grasses of the crater wall.

Hitting the crater floor, we were dwarfed from all sides by the crater walls. The Ngorongoro crater was once a huge volcano, larger than Kilimanjaro, that erupted with such force, it then collapsed in on itself creating what is now the Ngorongoro Crater. Ngorongoro in Swahili means bells and the crater is names such because of the farmers that used to come down into the crater to feed their cattle, goats and sheep and the noise the bells made circulating bouncing off the walls of the crater.

We came across a pod of about 30 hippos sleeping in the early morning sun within a very muddy pool, rolling over and laughing at one another.

We stopped at a picturesque lake within the crater floor for breakfast, just taking in the scenery and warmth as the sun began to rise higher in the sky. We were slightly plagued by small superb starling who were after our scrummy granola. On our way back to camp, we spied a couple of lion relaxing beneath a rocky outcrop.

After lunch we all moved into different rooms to have a chat about our morning when the two who were out on the deck suddenly went really quiet, sure enough, out of the corner of my eye, a wild cat emerged just off the main decking and casually made its way across the front of the mess area and disappeared beneath the deck. Sofa safari eat your heart out! With the help from a couple of the staff – who are completely passionate about their jobs and the area in which they work in – we tried to track and follow the wild cat, but she had disappeared just as quickly as she had emerged. Apparently, she had a den within the camp somewhere and she is seen reasonably regularly. In front of Entamanu’s main area, there is a ‘wishing tree’ where for generations members of the Masai tribes have come and placed gifts or wishes within the tree in the form of bracelets.

At 4.30pm we reconvened for a walking safari and set off down behind Entamanu towards the Serengeti. Winding our way through acacia trees shrouded with ‘old man’s beard’ moss which is often used by the Masai warriors as mattress material. We passed by a herd of 20 giraffe who had dotted their way within the trees, only visible by the occasional head movement or slow canter away from our direction.

We came to an end at one of the Masai Bomas where we were greeted with a traditional tribal welcome dance and song, this was very special, the way they moved and sang gave us the shivers, really quite emotional. They then gave us a tour of their boma and showed us around their homes. It was fascinating and is a definite must. We finished off our tour with a look around their jewellery shop, the views of the Serengeti in the back ground.

We bid our farewells to the Masai and departed the boma with Ian our safari guide. On the way back to camp we stopped for some sundowners overlooking the Serengeti side of the crater wall, there was a slight haze of dust over the plains.

We returned to the cosy camp sitting around the coal fires, amarulas in hand taking in our last night within the crater. The sights and sounds this camp has to offer is one of a kind and really is a completely and utterly magical experience. The camp itself is understated but supremely comfortable, deliciously warm beds to snuggle down into, warm strong showers, phenomenal views looking down into the crater and much much more. This really is a special place and somewhere you have to experience to believe it. Come wind, come rain or shine, you will be lost for words when staying at Entamanu Ngorongoro.