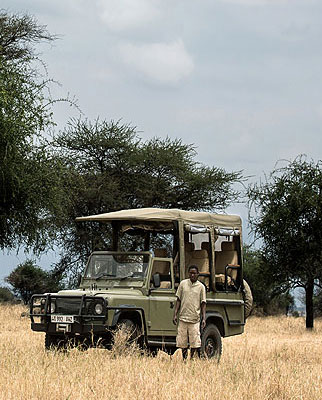 I was picked up by my private chauffeur, Abdala, just after breakfast at Rivertrees in Arusha where I had stayed for a one night stop over. We were embarking on a 3 hour or so drive to the Tarangire region of Tanzania. Usually we would transfer our clients via plane as this is far quicker and much more comfortable – although travelling by road has its perks! My chauffeur was not only very welcoming and very professional, he was brimming with knowledge about his home country – of course – as we drive through the city of Arusha with its surrounding coffee plantations and humid almost tropical atmosphere, the landscape then began to change dramatically, opening out into Serengeti type plans with rolling land as far as the eye can see.

There are three main tribes that still practice and uphold their ancestral traditions: The Masai, The Hasake and one other tribe – but abdula couldn’t remember the name!

We then met my safari guide – the wonderful Emmanuel – just outside of the Tarangire National Park. He would be taking me to Little Chem Chem where I was to be staying for the next two nights. We bumped down a dirt road passing the local farmers and their children with their herds of goats and sheep, bells around their necks clonking this way and that as they grazed their way across already stunted grass. Sure enough, as we entered the private reserve Little Chem Chem is situated on, leaving behind civilisation for a while, we came across a small herd of elephant taking shade under a canopy of acacia trees. Their trunks swinging from side to side, scooping up dusty earth which they would then shower over their backs and then behind their ears, trying to cool themselves down.

As we approached the small camp, we passed dazzles of zebra, journeys of giraffe, some more elephant and even some buffalo. Arriving at Little Chem Chem, I was greeted by Kara, one of the general managers who took me straight to a sumptuous lunch prepared under the shade of a small ballanite tree looking out towards Lake Burunge. I had a wonderful butler, John, who made sure my glass was topped up with wine and sparkling water as well as delivering mouth-watering food. There is no where I have been yet (apart from Molori in Madikwe) that has food as delicious as this: For starter appeared delicious cheese croquets with aioli sauce, followed by vegetable gratin, lentils and karabuchi salad – John then persuaded me to try the pudding – albeit it wasn’t to persuade me at all, homemade cookies and cream ice-cream with hot chocolate sauce – I really didn’t need it, but it would have been rude not to.

The rest of the afternoon was a fully scheduled itinerary of relaxation and taking in the sights and sounds of this wonderfully private 18,000-hectare conservation boarding Tarangire. I watched a few dust storms circling over the dry Lake Burunge in the distance, almost apocalyptic like swallowing up dazzles of zebra and antelope as it made its way towards the camp. There was also a beautiful lilac breasted roller perched on the stump of a tree at the watering hole which was being dive bombed by a small flock of love birds. Who needs a television when you have views and entertainment like this! 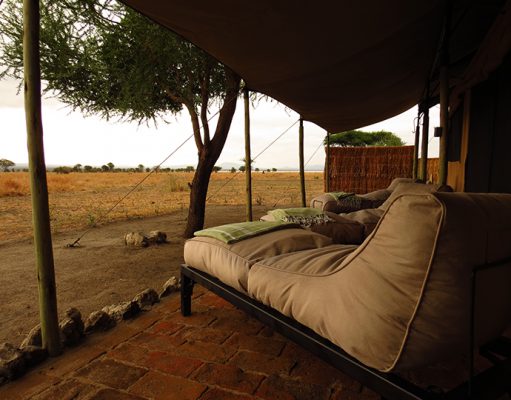 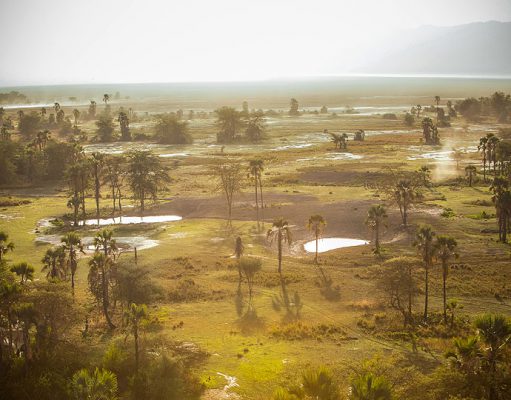 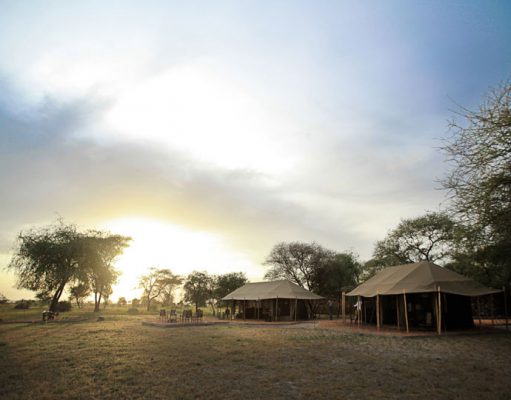 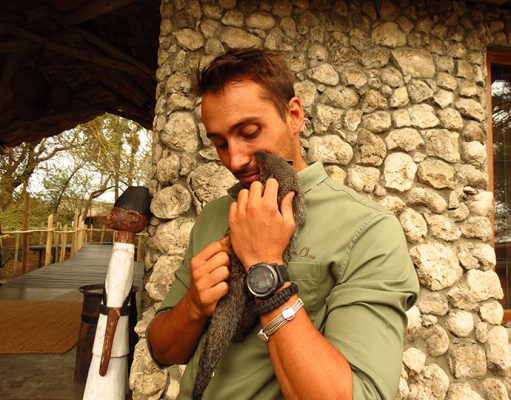 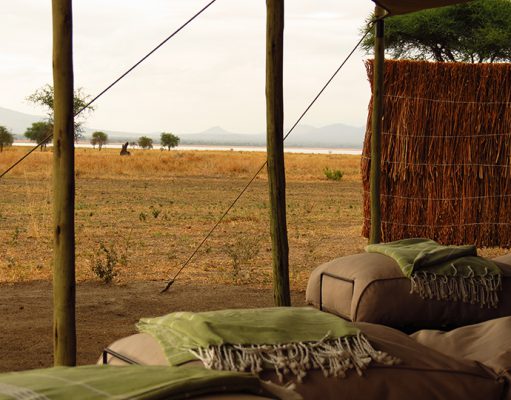 As I was walking back towards the main mess area, about 20 metres from me were 4 huge bull elephants under an acacia tree. This is the dream about going on safari, around every corner there will be something special. I hopped into the vehicle and Emmanuel and I ventured off in search of some wildlife.

We came across the male elephants that were loitering just outside of camp – these boys were huge and definitely well into their twilight years. Every elephant is tracked and monitored and the two biggest of these males both had a left and the other a right tusk missing. Chris and Caspi are always seen together and are truly magnificent animals.

The scenery is absolutely stunning around Little Chem Chem – it is incredibly dramatic. After following dazzles of zebra that were emerging out of the thick bush to sleep on the open grassy plains around Lake Burunge, Emmanuel made his way to the shore line where there was a really lovely welcome – John was waiting, gin and tonic in hand, small fire going, two seats, Chem Chem designed drinks cabinet with the most wonderful series one land rover, you could not get more glamorous than this scene, it was spectacular and I could not wipe the smile off my face.

Emmanuel and I sat and talked about wildlife, tribes, the history of the reserve and much more as the sun began to sink beneath the horizon and the stars were beginning to shine. With every minute that ticked by, another star would appear becoming brighter and more spectacular as the light diminished. It really was magical.

Arriving back at camp, Kara joined me for supper, which again, was served by the delightful John. Little Chem Chem is simply beautiful at night; all the pathways had been adorned with small tea lights giving off a really romantic warm glow. The watering hole was lit up with a small light allowing us to see the animals coming for a night time drink – Askari’s were keeping patrol in the distance but also providing an extra light on the watering hole – a few elephants came down to drink and then we were lucky enough to see a leopard mozy on down! All this whilst tucking into a delicious feast – beef carppacio, followed by a vegetable tart.

Towards the end of supper, as I was being escorted on my way back to my tent, we heard the distant boom of a pride of lion roaring in the distance. What a perfect day on safari!

The next morning, I was woken up with a very strong cup of coffee and the sounds of the Cape turtle dove cooing in the distance. Emmanuel and I set off in search of the pride of lion we had heard the night before. Sure enough, having found a pair of superb martial eagles perched high in the branches of a dead tree, we came across the pride of lion. Seven cubs between eight and nine months old all ogling a nearby dazzle of zebra. Luckily for the zebra, the lion chose sleep in favour of food on this occasion. Emmanuel and I sat watching this pride of lion for almost an hour, whilst having another cup of coffee and some bitings – imprinted on Chem Chem’s safari mugs is a wonderful Swahili proverb ‘Patience attracts happiness, it brings near that which is far.’

We then went in search of Omo, the famous white giraffe found around Little Chem Chem – we did luckily come across her! A very beautiful pale ginger female with the longest eyelashes.